Last May we happily announced that Rafael França and Carlos Antonio earned commit access to the Ruby on Rails repository – it was a great accomplishment that deserved its own blog post. Today, we have some great news and we want to share with our readers. Just a few days ago, our team mate Rafael França (@rafaelfranca) received an invitation to join the Rails Core Team. And, of course, he accepted!

Rafael contributed to different features coming up in the next Rails 4 release and worked extensively with other Rails contributors to smash bugs and provide many improvements to the framework. I am personally happy to have a friend joining me in the Rails Core Team.

Furthermore, Rafael França’s contributions go beyond Rails. Lately he has also contributed to many other open source projects, like Mongoid, Janky and Dalli besides Plataformatec’s own projects like Devise, Simple Form and Elixir. 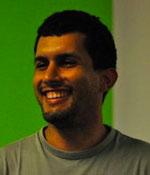 From all your friends at Plataformatec.

One response to “Rafael França joins the Rails Core Team”

Filtering examples in RSpec Carlos Antonio da Silva joins the Rails Core team \o/
This is the company blog of Plataformatec, a software development and consultancy company, specialized in Elixir, Ruby and Agile.