This year’s RailsConf was held in Chicago, from April 22 to 25, and Plataformatec was there, as in previous years, and this time it was represented by George Guimarães, Lucas Mazza, Rafael França, and myself included. Even though I’ve attended the last 5 RubyConf / Rails Summit here in Brazil, this was my first time at RailsConf in the US, and I have only one word to TL;DR it: awesome.

Chicago is a welcoming city, there are lots of nice tourist attractions to visit, and the conference was a great opportunity to meet new people, share ideas, collaborate, and learn new things from the well selected list of talks. But all of this is quite hard to explain in words, so I’ll go with the a picture is worth a thousand words motto and show you a series of pictures, hopefully they will show you better what I mean.

The highlight of the first day was DHH’s keynote about clarity, patterns and TDD, which sparked many conversations/discussions during the day. Farrah Bostic also gave a nice keynote at the end of the day, entitled What Happens to Everyone, When Everyone Learns to Code, which added even more to the topic DHH had covered. 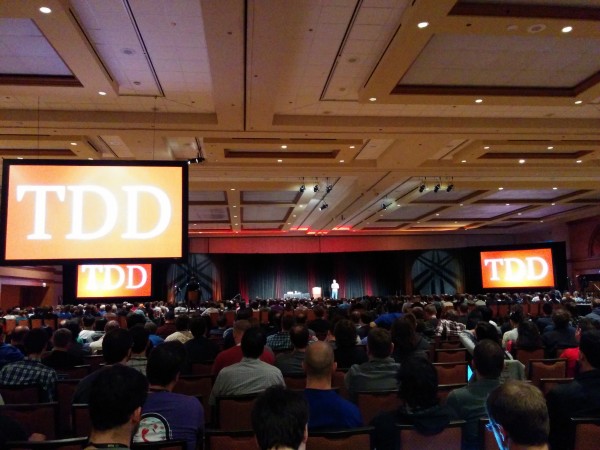 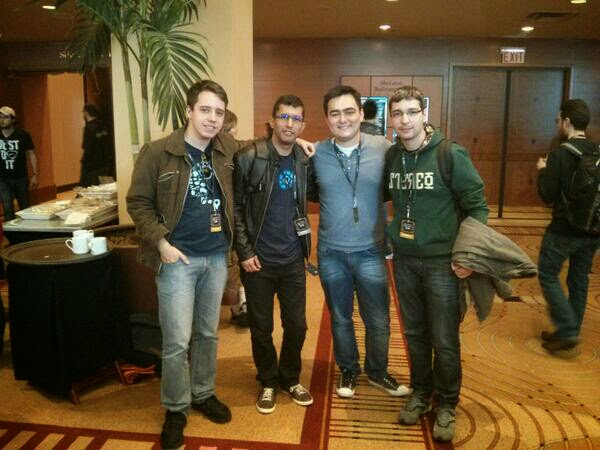 In the second day I was a bit nervous, since I was going to give my very first talk in English, Tricks that Rails didn’t tell you about. I received awesome feedback from a lot of people after the talk and in the following days of the event, thank you everyone for that <3. You can check the embedded slides at the end of this post. 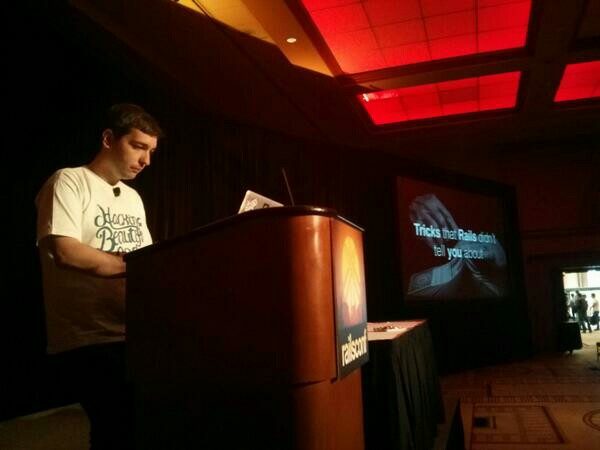 By afternoon we participated in the Community Office Hours sponsored by Heroku, where we gathered a lot of Rails Contributors to answer questions and help the community with any Rails issue they could be having. It was an opportunity to talk to different people and understand how they use the framework and the real problems they have, but it was not a very busy time for everyone, so some contributors had time to sit together and hack some stuff. What came out of that is a script to label stale issues on the Rails repository, marking them to be closed later in case no feedback is given in a timely fashion. Great stuff. 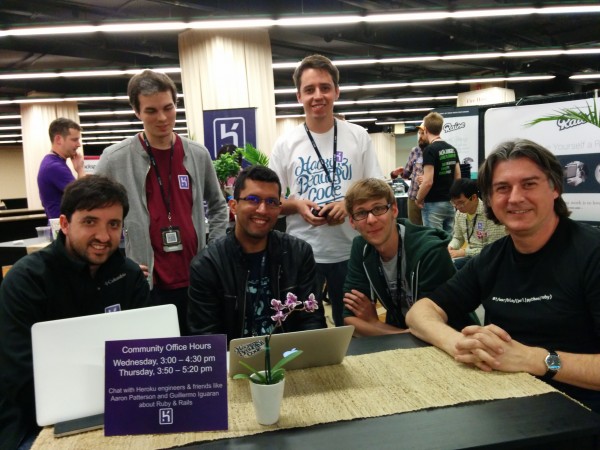 On Wednesday night we went to the Basecamp Open House event, and we took the opportunity to take a picture of most of the Rails Contributors present at RailsConf. 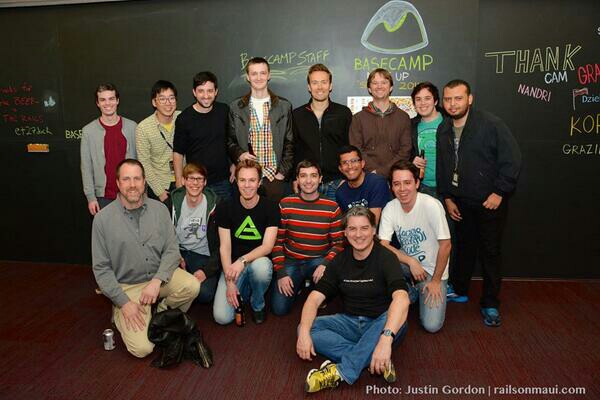 But we missed some folks on this picture, so we decided to take another. However, DHH was not present anymore, thankfully we had someone skilled enough to draw his double: 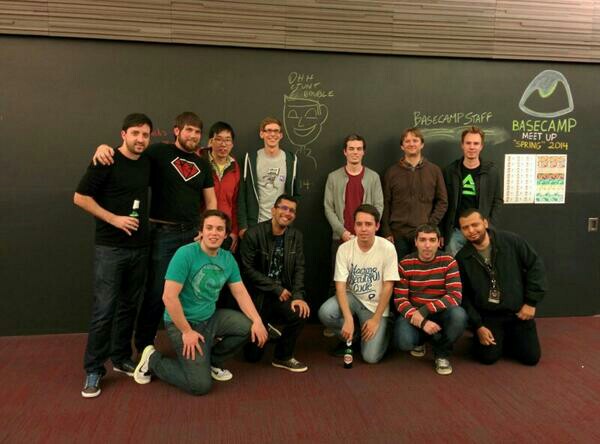 The third day was very important for us, but specially for my friend and coworker Rafael França: he got a Ruby Hero award <3 <3 <3. 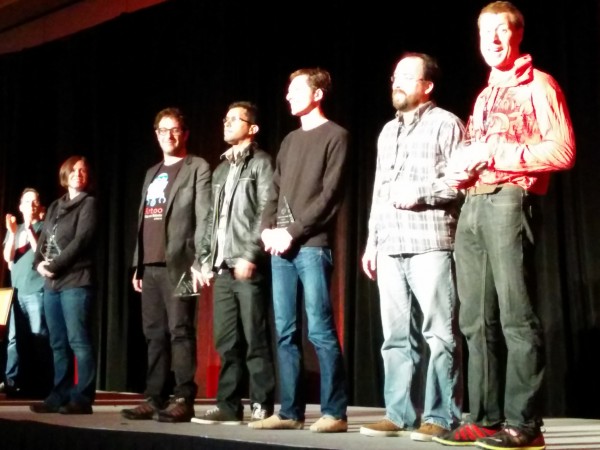 As most of you probably know, Rafael has been doing an amazing work with Rails and all the surrounding environment, working on all fronts, solving issues, releasing gems, and being super present on discussions everywhere you can think of. Besides that, he dedicates some time to maintain our Open Source projects, for example lately he did some work to add Bootstrap 3 support to Simple Form (check the latest 3.1.0.rc1 version :D). 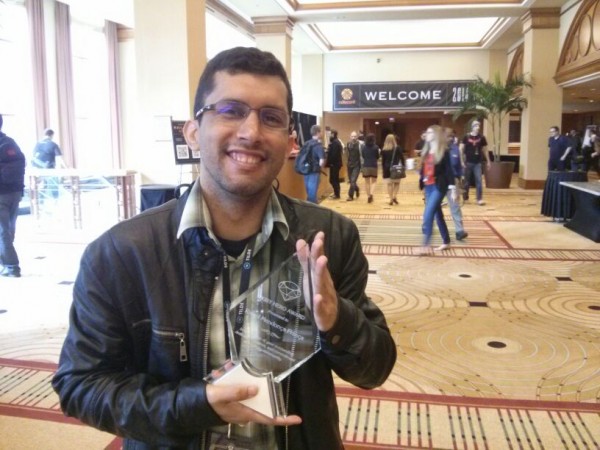 You deserve it, congratulations!

On Thursday afternoon we had the second turn of the Community Office Hours, this time it was busier and we were able to help many developers having issues. I hope we can do something like that during the next RubyConf Brazil. At night we went to Code Climate’s after party and had some beers. Rafael returned to Brazil on this day, heading to Recife for the Abril Pro Ruby conference where he was speaking (expect another blog post on this soon).

On the last day the closing keynote was a super awesome talk by @tenderlove, where he showed us that there’s a real need for science on our work, and then he merged AdequateRecord to Rails master while on stage! Well, not really on stage, but it’s merged :D. We also handed on our last Devise, Simple Form, Elixir, and Hacking Beautiful Code stickers. If you got one, please tweet a picture to @plataformatec, we’ll appreciate that. 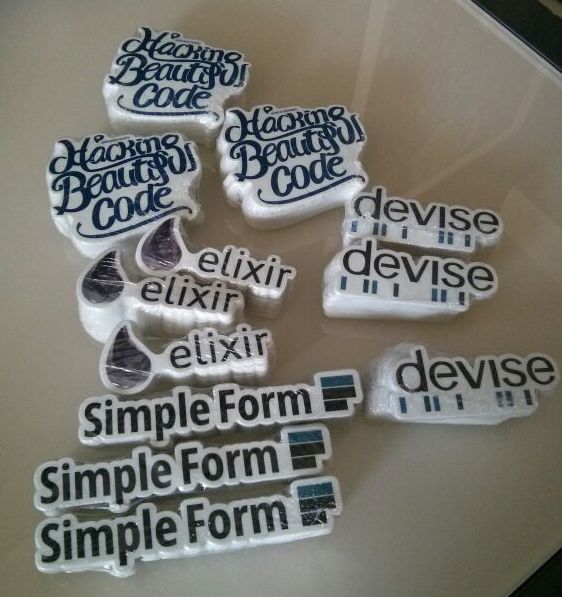 Finally, on Friday night we met with our friend David Chelimsky for a night of conversation and brazilian music on a place called Revolver. It was the perfect night to close the conference. 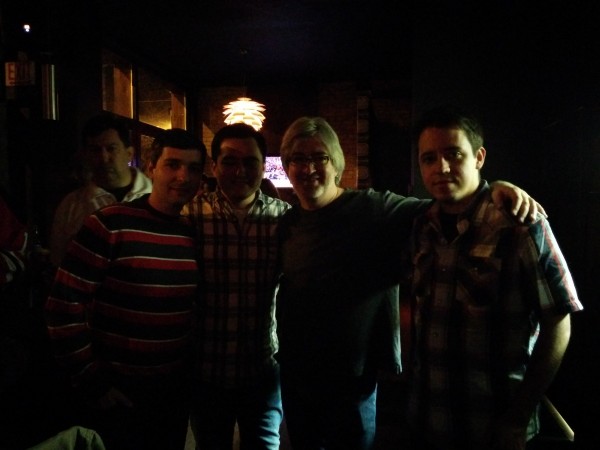 We arrived a couple of days before the event, and left the Sunday after, so we had some free time to visit Chicago and enjoy some tourist stuff.

We started by visiting the Skydeck on Saturday night. It was a breathtaking view, I had never seen anything like that before, it’s super worth the visit. 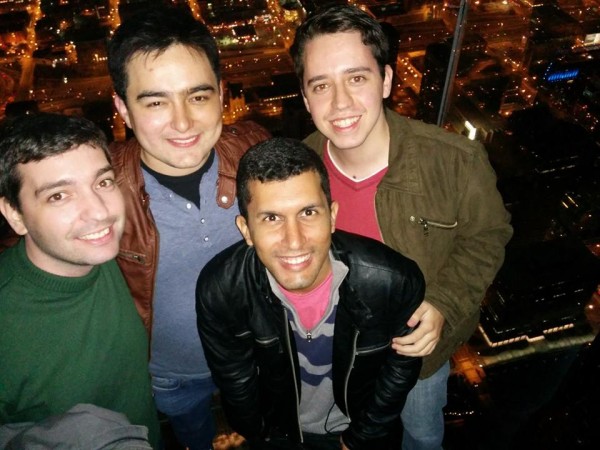 On Sunday we went to the Navy Pier, and did the architectural tour. We spent almost 1h30 hour learning about Chicago, its architecture, the great fire, batman, transformers, and much more, definitely recommended. 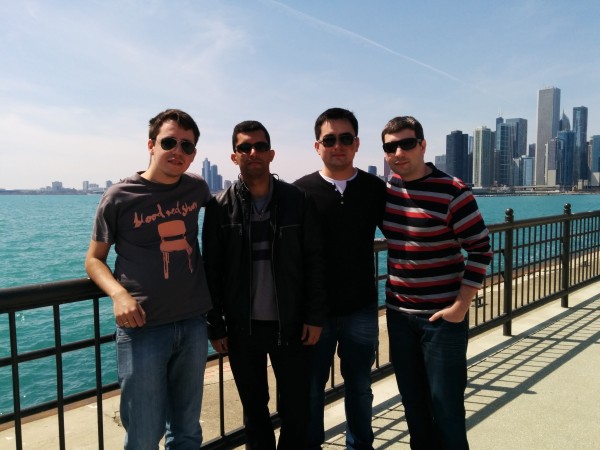 After the Pier we decided to go to the Shedd Aquarium. Most of us had never been to an aquarium before, and it was such a great experience. You never know what you can find under the water, right? 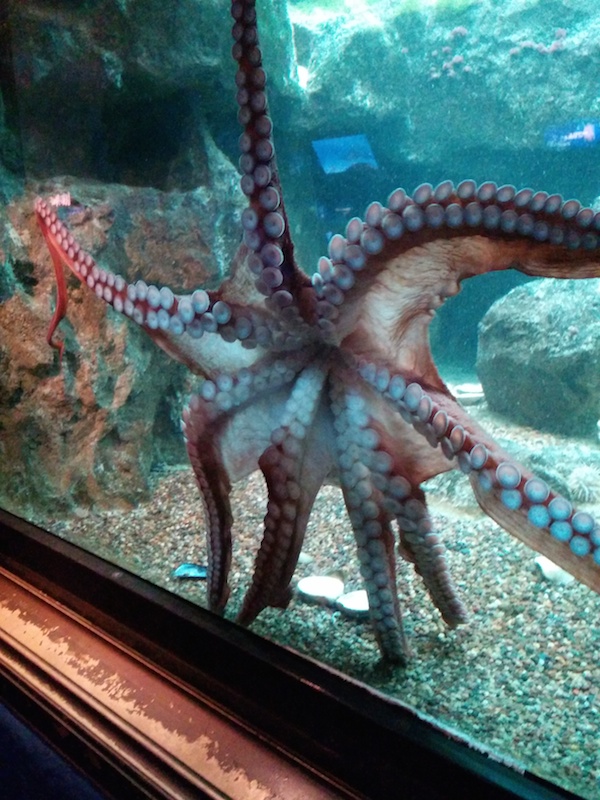 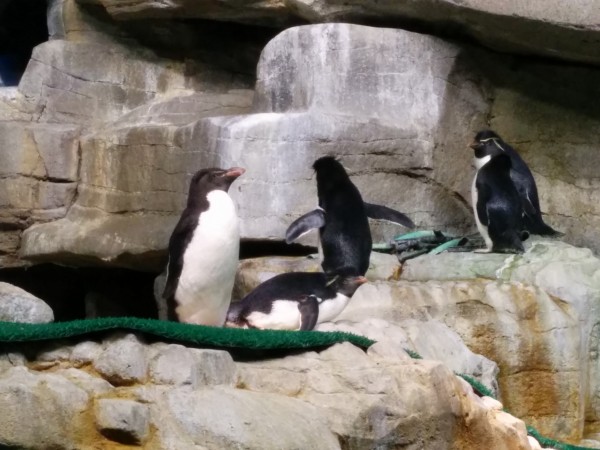 We were very tired at this point but wanted more, so we went to the Adler Planetarium, which was unfortunately about to close – it was around 5PM. So we took a picture that could be easily transformed into a music album cover, and headed to a nice coffee place near the Millenium Park. 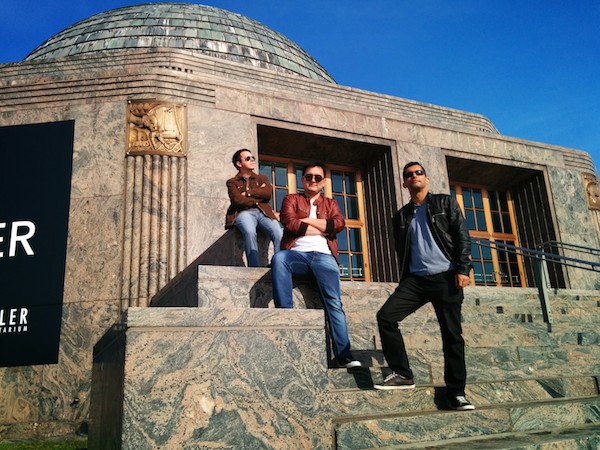 We couldn’t go back to the hotel without taking the famous picture on “The Bean” steel sculpture in the Millenium Park, so here it is: 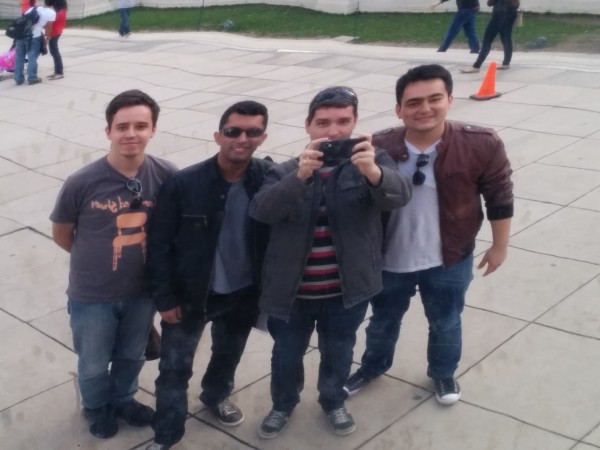 Monday, the day before the conference, was marked by the visit to the Adler Planetarium (we made it!), which is a cool place to go if you enjoy such things as we do. 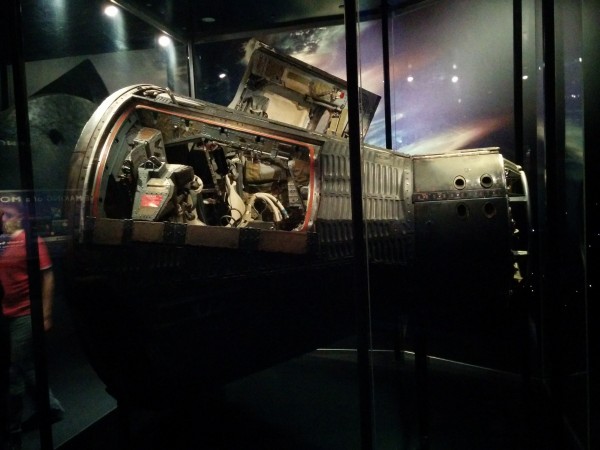 We also went to the Field Museum, which is another must place to go, where you can easily get lost in all those sections, it seems like a big maze, but it’s very enjoyable to walk through and learn more about all kinds of history. And we closed the day having dinner with some Rails Contributors and Basecamp folks. 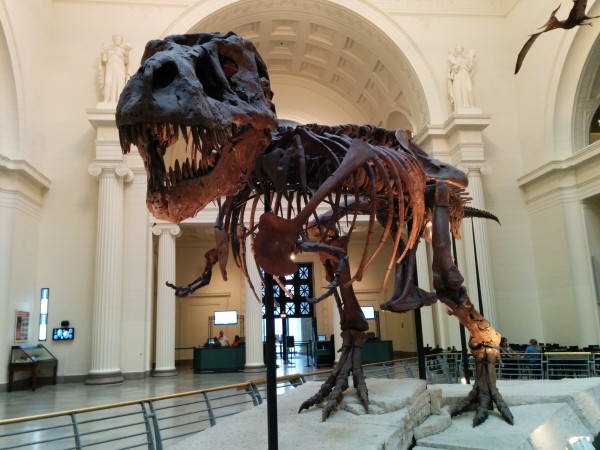 Finally, on the Saturday after the conference we did some Shopping, and during the afternoon George and Lucas went to a Comic Conference that was happening in Chicago.

Besides that, I couldn’t end this post without commenting about the great breakfasts we had, I think I can say with certainty that we all particularly enjoyed these two places: Eggsperience Pancakes & Cafe and Meli Cafe. Definitely recommended. 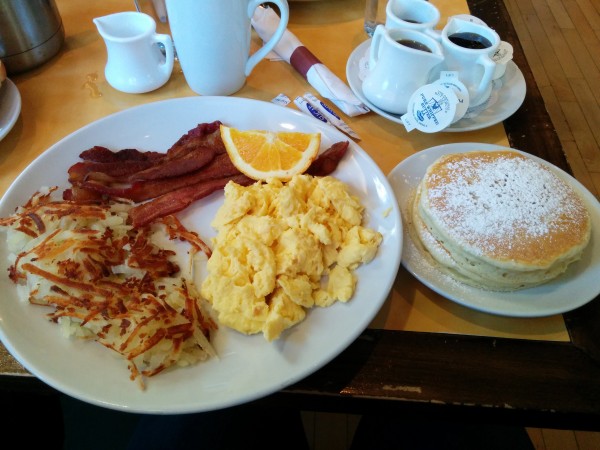 There’s nothing like eggs & bacon to start your day :).

I hope I could show you at least a little bit how RailsConf was awesome for us. Conferences are always great to do networking, and RailsConf in particular allowed us to share and collaborate a lot with other people from the community. I like to think this is the main point of events like that, it’s where most of the good things come from, sharing and discussing ideas.

And Chicago is really a great city for tourism, there are lots of nice places to go, hopefully I will be able to go back there someday, visit some of these again and some other places, plus visiting some of the folks we met from Chicago would be cool too.

Here are the slides of my talk, Tricks that Rails didn’t tell you about:

I’ll update this post with the video as soon as it is online. In addition to that, we’ll be preparing another blog post with some of the talks we enjoyed the most after the videos are available, so we can link everything properly.

I want to thank again everyone that came to talk to me or tweeted about about my talk, I really appreciate every single feedback I’ve received. And also thanks to everyone who came to say thanks for our Open Source projects, we appreciate it a lot, it keeps us motivated to work more and more on these projects so that everyone can benefit from them.

How about you? Did you go to RailsConf? Did you enjoy it? Or are you planning to go next year? Remember, it’ll be in Atlanta, hopefully we’ll see you there.

Where is the corruption of agile? Tips for keeping your Open Source Software issues tracker tidy
This is the company blog of Plataformatec, a software development and consultancy company, specialized in Elixir, Ruby and Agile.